Municipal representatives from the Eden district, delegates from the Western Cape Government, key private sector stakeholders, as well as academic partners, engaged in vigorous discussions relating to the strengths, weaknesses, opportunities and threats regarding the status of the region’s investment readiness.  Key factors under discussion included: the readiness of the Eden district for investment opportunities, tourism, as well as skills development. 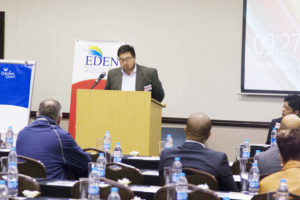 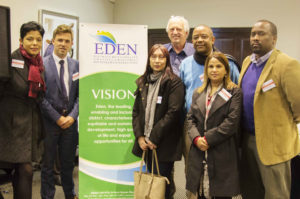 Municipal Manager of Eden DM, Mr Monde Stratu, in his address asked the delegates to embrace the concept of Radical Economic Transformation and that they must define it to an extent where it can be of interest to the economy and environment. Mr Stratu also mentioned, amongst others, that ways need to be found in order for jobs to be created, instead of people receiving grants from Government.

Delegates were then given an opportunity to share important factors that could shape a conducive environment for investors to come and do business in the Eden district Characteristics of a strategic enabling environment were further discussed. The ease to do business, with much emphasis on red-tape reduction within the municipal regulatory environment etc. were amongst the challenges raised, e.g. complicated tender documents that need to be completed by service providers etc. This point was raised by Mr Tebello Mpuru, Deputy Manager: Finance at Eden DM during his presentation. Another question that was raised: “How do we improve on making the Eden district more ‘user friendly’ for business from the outside?”

The second day of the Garden Route Investment Readiness Workshop started on a high note, set from the previous day’s program. Stakeholders from the Tourism industry in the Eden district, attended the Tourism workshop, aimed to improve local economy and cultivate economic development within the region through tourism.
The Executive Mayor of Bitou Municipality, Councillor M. Peter Lobese opened the program and welcomed the guests to the town of Plettenberg Bay. “There is a perception that tourism does not benefit previous disadvantaged communities,” he started, “…but today I want to appeal to you, to come up with a strategy that expel this kind of perceptions,” Mayor Lobese said. Furthermore, he affirmed Bitou municipality’s support and commitment towards Tourism, and concluded that the Bitou Council is willing to implement the outcomes that ensue from the workshop, as they believe that tourism is the driver of the economy in their town. 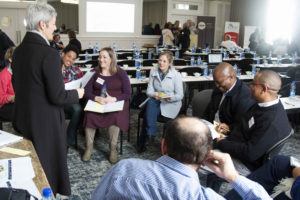 Delegates provided valued inputs during the group discussions at the Tourism Workshop.

Ms Inge Dykman, Head of Leisure Tourism and Trade from WESGRO, gave a presentation on what WESGRO can offer stakeholders in order to market the region and to promote the Garden Route and Klein Karoo as a well-known tourism destination. Followed by Ms Jeanetta Marais from the Mossel Bay Business Chamber, who also did a presentation, urging stakeholders to establish what makes their destination unique, to urge them to perceive it as the place they would like to spend their next holiday. In conclusion she emphasized the power of social media.
The rest of the session was facilitated by Mr Edward Jantjies, Director: Corporate Services at Mossel Bay Municipality. Attendees were divided into interactive work groups, during which questions were discussed, noted and feedback given to the rest of the groups. The key focus areas were: roles and responsibilities, branding, events, challenges faced by Small Medium and Micro Enterprises in the tourism industry, as well as projects and initiatives. 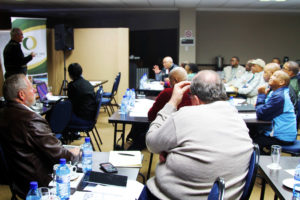 Delegates made use of the opportunity provided to them, to give inputs at the Skills Development Workshop.

Delegates made use of the opportunity provided to them, to give inputs at the Skills Development Workshop.After a warm welcome by the Executive Mayor of Oudtshoorn, Cllr Colan Sylvester and address by the Chairperson of the Eden DM Skills Development Forum, Cllr Stephen de Vries, delegates got an opportunity to listen to presentations regarding the Garden Route Rebuild Initiative that serves as a pivotal point in the history of our district to ensure that we attract investment and unlock opportunities as part of and beyond the rebuild process after the Eden district, especially Knysna and Bitou were partly destroyed by devastating fires. The presentation was done by Dr Florus Prinsloo from the Office of the Premier. South Cape College’s Ms Tertia Terblanche also shared the roll-out of the Foundation Phase Education programme, where after Mr Peter Pepler from Pepco Associates touched on the Eden district’s Socio Economic Profile. All these pointers are vital in ensuring that an ideal Skills Development Plan are compiled for the Eden region.

The following questions, amongst others, were raised by which the two groups actively responded to:

The information gathered at the three-day event was captured and feedback were provided to all participants at the event. The content will be incorporated into an action plan that will address the shortcomings/gaps as preparation for an Investment Conference that the Eden DM foresees to host later this year.

The Eden DM team, consisting of Councillors and Staff, as well as facilitators of the Skills Development Workshop, during the closing of the event.

In his closing remarks, Cllr Rowan Spies, member of the Eden District Skills Development Committee, extended a word of gratitude to the hosts of the events, representatives from the Western Cape Government, including the Office of the Premier and WESGRO, representatives from the local municipalities in the Eden district, representatives from Training Institutions such as the University of Western Cape, South Cape College, the Local Government SETA, as well as Programme Directors, Facilitators, Councillors and Staff of Eden District Municipality, for a fruitful and active “investment readiness” discussion platform.

Want to join the discussion?
Feel free to contribute!